Apple has left its run at the business market too late, according to Australian resellers interviewed by CRN.

Apple reached record revenue in Australia last year but paid only $40 million in tax, according to the company’s local filings.

Phone unlocking illegal in US

Citizens of the United States are no longer allowed to unlock their smartphones after an official decree banning the practice came into effect over the weekend.

Word, Excel, Powerpoint and Outlook have been redesigned to work better with touch-screen-controlled computers.

Dutch electronics giant Philips is to sell off its home entertainment business, including hi-fis and DVD players, to Japan’s Funai Electric.

Research In Motion is changing its name to BlackBerry in move to refresh its tarnished image as it begins marketing a reengineered line of BlackBerry 10 smartphones.

The first New Zealander has been found guilty by the Copyright Tribunal under the country’s anti-file sharing law and ordered to pay a total of NZ$616.57 (A$493.22) for three infringements.

Hearing an application from the Recording Industry Association of New Zealand, the tribunal was told that the person accused of file sharing had downloaded two songs, “Man Down” by Rihanna and “Tonight Tonight”  by Hot Chelle Rae, the first tune twice, between November 2011 and July 2012.

The accused, a Telecom New Zealand customer, admitted she had downloaded the first Rihanna song, but said she was unaware that it was illegal to do so.

The accused was found by the tribunal to have downloaded the songs and was ordered to compensate RIANZ with NZ$1.79 for the Hot Chelle Rae song, and NZ$2.39 times two for the Rihanna one.

She was also ordered to contribute NZ$50 towards the cost of sending out copyright infringement notices and NZ$200 to compensate RIANZ for the tribunal application fee.

A further eleven alleged file sharers await their hearings before the tribunal, which can award damages of up to NZ$15,000 (A$12,000).

RIANZ had asked for a total of NZ$2,699.25 in penalties for five songs, saying each had been downloaded ninety times in its estimate.

The study of 100,000 adults (pdf) was conducted by research firm The Ponemon Institute and ranked 217 companies on their perceived trustworthiness. 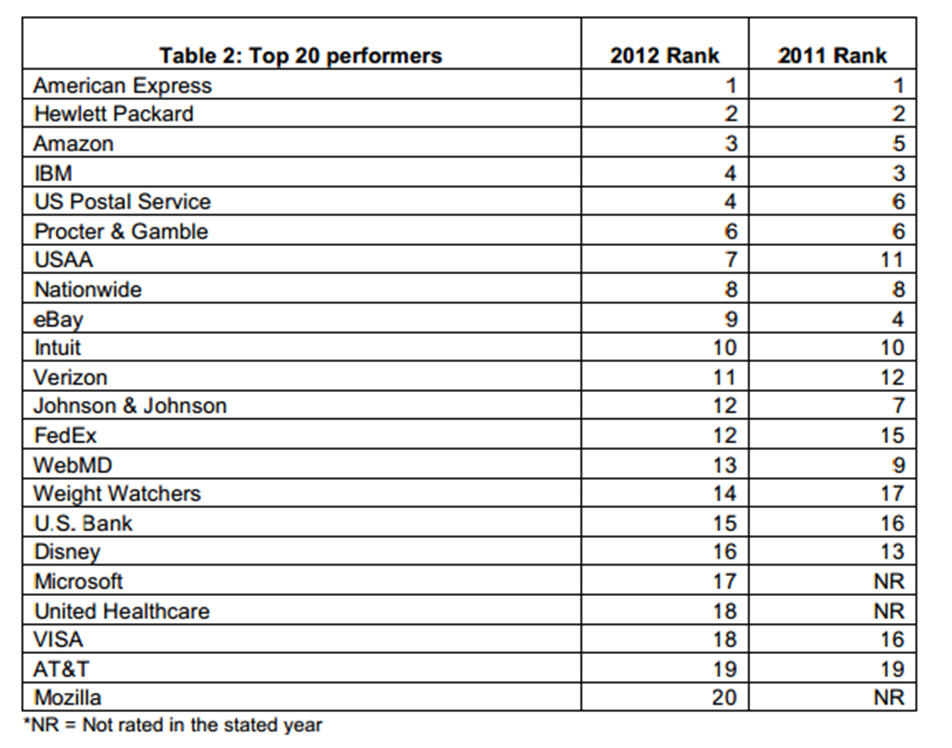 US fighter jets to get fricken lasers

http://www.news.com.au/technology/us-fighter-jets-to-get-fricken-lasers/story-e6frfro0-1226564377109
Defense Advanced Research Projects Agency (DARPA) has recently announced that it is looking to test fighter jets equipped with laser turrets as early as 2014. Lockheed Martin won the $9.5 million contract from DARPA and is currently working on phase three of the Aero-Adaptive/Aero-Optic Beam Control project, which would allow tactical aircraft to fire mounted lasers, through extreme turbulence, at enemies coming from behind.

DARPA is also developing the High Energy Liquid Laser Area Defense System (HELLADS), a smaller, lighter, infinitely more terrifying iteration of the agency’s earlier laser cannon outing, the Airborne Laser Testbed, which was so cumbersome it could not be mounted on anything smaller than a Boeing 747. HELLADS’s strength lies in it versatility: the system can be utilized for both air and ground combat situations.

http://www.pcworld.idg.com.au/article/452105/rdio_now_offering_free_music_streaming/
Popular subscription music service Rdio has announced that Australian users can now stream free music on the Web, bringing the service in line with the US.
From 8am tomorrow Australian Rdio users will be able to stream music for free at rdio.com or through the desktop app on a PC or Mac, with no credit card details or payment required. The free service will offer a limited allowance of streaming music for six months, without ads, after which a subscription to one of Rdio’s paid plans will be required.

The free streaming service also allows users to following friends and artists, create playlists and share music through Facebook and Twitter.
Rdio was previously unavailable to use in Australia without a subscription cost. The company offers an $8.90 per month payment plan for unlimited Web and desktop streaming and a $12.90 per month payment plan for unlimited mobile device streaming and compatibility with Sonos and Roku devices. Both pricing plans remain unchanged despite the launch of the free service.

http://www.news.com.au/technology/wikileaks-film-script-leaked-assange/story-e6frfro0-1226562367177
Julian Assange says he has obtained a leaked copy of the script for The Fifth Estate, a DreamWorks film about the maverick computer expert and his famed secret-busting site.
In a speech via videolink before the Oxford Union debating society earlier this week, Assange said his unauthorised sneak peek has left him convinced the film is a hit piece.
“It is a mass propaganda attack against WikiLeaks, the organisation (and) the character of my staff,” he said, adding that the movie – the opening scenes of which Assange described as taking place in Tehran and Cairo – also hyped Western fears over the Islamic Republic’s disputed atomic energy program.
“It is not just an attack against us, it is an attack against Iran. It fans the flames of an attack against Iran,” he said.
A DreamWorks spokeswoman declined to comment on Assange’s claims.

http://www.news.com.au/technology/un-group-oks-new-video-format-to-save-bandwidth/story-e6frfro0-1226562712432
THE UN telecommunications agency says its members have agreed upon a new compression format that could dramatically cut the amount of internet bandwidth currently used by video files.
The International Telecommunication Union says the format, or codec, known as H.265 would require just half the amount of data needed by its predecessor, H.264.
The Geneva-based agency says videos encoded using the H.264 format – which is favored by devices such as Apple’s iPad – currently account for two-fifths of web traffic.
ITU said in a statement the new H.265 codec could pave the way for “the next wave of innovation,” such as faster movie downloads and higher-quality video streaming.

http://www.news.com.au/technology/anonymous-hackers-hijack-website-to-avenge-activist-aaron-swartzs-death/story-e6frfro0-1226562714637
HACKER group Anonymous said it had disabled the US Sentencing Commission’s website in revenge for the death of internet freedom advocate Aaron Swartz, and vowed to release government data.
The website of the commission, an independent agency of the US Justice Department involved in sentencing, was apparently hacked into early Saturday.
Anonymous threatened to make public the encryption keys to files that could potentially embarrass judges and other federal employees, saying it acted in protest at the Justice Department’s alleged mishandling of Swartz’s case.
Swartz was facing 35 years in prison and a $US1 million ($A960,661) fine for breaking into a closet at the Massachusetts Institute of Technology to plug into the computer network.

Beware scammers and their buzzwords

http://www.news.com.au/technology/beware-scammers-and-their-buzzwords/story-e6frfro0-1226561171821
BEWARE tweets about Barack Obama, the Australian Open and gun control this month – internet security experts say they’re the top three buzzwords currently being used by cybercriminals to lure victims on social media.
And keep an eye out for posts mentioning the Super Bowl, Playstation 4 and The Ashes, topics predicted to be popular with canny cyber crims throughout 2013.
Research by tech security firm Trend Micro Australia has revealed this month’s most popular keywords used by online scammers, who use them to make their tweeted links to malware and hacking sites seem legitimate.
Trend Micro cyber safety expert Aman Chand said big news events such as President Obama’s inauguration and the tennis, which are widely discussed on social media, were easy targets for criminals to latch onto.

In line with a stock database leak from earlier this week, Apple today officially announced a new 128 GB version of the fourth-generation iPad with Retina Display.

“With more than 120 million iPads sold, it’s clear that customers around the world love their iPads, and everyday they are finding more great reasons to work, learn and play on their iPads rather than their old PCs,” said Philip Schiller, Apple’s senior vice president of Worldwide Marketing. “With twice the storage capacity and an unparalleled selection of over 300,000 native iPad apps, enterprises, educators and artists have even more reasons to use iPad for all their business and personal needs.”

The new larger-capacity iPad launches next Tuesday, February 5 and will carry a $100 premium over the current top-end configuration, coming in at $799 for the Wi-Fi models and $929 for the Wi-Fi + Cellular models.

Rumors and hints of a 128 GB iPad developed quickly with a reference to higher-capacity iOS devices appearing in what turned out to be the shipping version of iOS 6.1 when it was released as a beta to developers over the weekend. Just a day later, new high-end iPad configurations were spotted in the stock database of a major U.S. retailer, suggesting that a launch was indeed imminent.

Alongside today’s release of iOS 6.1, Apple also issued an update for the Apple TV. The new 5.2 software update includes a number of enhancements including direct iTunes in the Cloud music streaming, Bluetooth keyboard support, Up Next support, and more.

– iTunes in the Cloud: Browse and play your purchased iTunes music directly from iCloud.

– Bluetooth keyboard: Use your Apple Wireless Keyboard to control your Apple TV. See this article for more information.

– AirPlay audio for videos: Send stereo audio from movies, TV shows, and other videos on Apple TV to AirPlay-enabled speakers and devices (including AirPort Express and other Apple TVs). 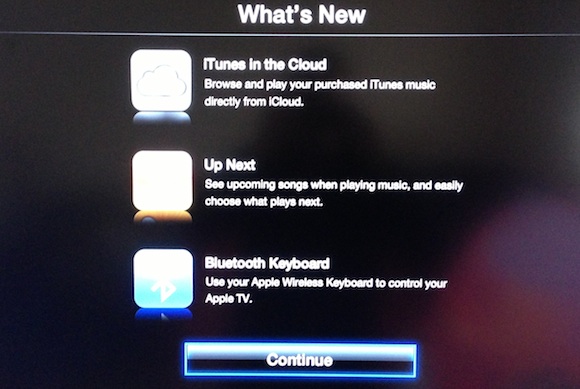 Curiously, Apple has released three versions of the Apple TV update, covering not only the second-generation (AppleTV2,1) and third-generation (AppleTV3,1) boxes but also a new AppleTV3,2 box. It is unclear exactly what the difference is with the new box, but the numbering scheme suggests that it is a relatively minor change. 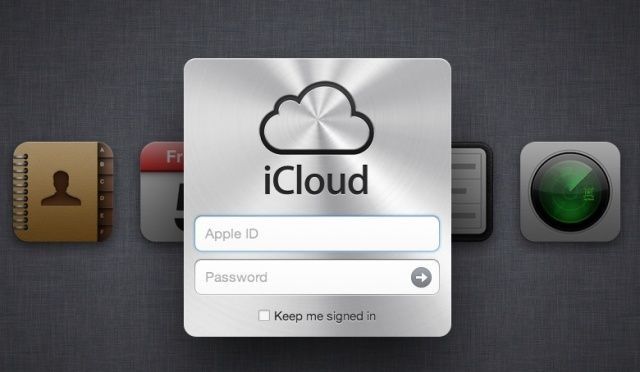 What could this mean for your data?

The Foreign Intelligence Surveillance Act (FISA) allows the U.S. government open access to electronic information stored by non-US citizens on US-based servers, like a host of cloud services available today. iCloud, Google Drive, Dropbox, and other popular services are all subject to this law, passed in 2008 by the Bush administration and recently re-authorized by the Obama administration for another 5 years.

What this means is that any data stored by non-American citizens on cloud servers here in the US is able to be looked at in entirety by various agencies in the US federal government, including the NSA, FBI, and CIA.

Caspar Bowden, Chief Privacy Adviser to Microsoft Europe for nine years until 2011, told UK-based The Independent: “What this legislation means is that the US has been able to mine any foreign data in US Clouds since 2008, and nobody noticed.”

Several posts, like this one at the Huffington Post, written around the time of the re-authorization of the FISA mention email and overseas phone calls, but do not take notice of cloud-based data.

Sophie in ‘t Veld, a Dutch MEP who serves as vice chair of the European Parliament’s civil liberties committee, told The Independent, “Let’s turn this around and imagine this is not the United States having unlimited access to our data but the government of Mr Putin or the Chinese government – would we still wonder if it’s an urgent issue? Nobody would ask that question.”

It’s inevitable…but when will it happen? The rumor roundup for Apple’s next iPhone starts now.

iPhone rumors are like flies at a summer picnic: they’re nearly unstoppable. Collected in one batch are all the iPhone 5S/6 rumors CNET has reported so far, with some commentary on where these rumors came from.

We always have long wish lists for newer features and further redesigns, but the bottom line is this: nobody knows exactly what we’ll get until Tim Cook reveals it on stage later this year.

That said, we’ve got plenty of educated guesses. With that caveat firmly in place: