Add LinkedIn to the list of Internet companies trying to make themselves safer from cyberattacks by adding two-step authentication.

Users of the professional social-networking site now have the option to add two-step verification to their accounts, which is designed to add another layer to the sign-in process when logging in from a new or unknown device. With the feature enabled, users will be prompted to type a numeric code sent to their phone via SMS when logging in from an unrecognized computer or device for the first time.

Most Internet accounts that have become compromised are illegitimately accessed from a new computer or device, LinkedIn said Friday in a blog post. When enabled, the new feature makes it more difficult for unauthorized people to access users’ accounts because both their password and mobile phone are needed to log in, LinkedIn said.

Two-step verification can be turned on using the site’s settings page for users’ security options. After the feature is enabled, the site will send the code upon sign-in once per device. A user will be notified via email each time his or her account is signed into using a new device.

The changes come one week after Twitter introduced two-factor authentication following a series of recent hacks targeting high-profile businesses on the blogging site. Security experts had long been calling for the company to make two-factor logins an option.

Last year, LinkedIn users were advised to change their passwords after it was reported that millions of “unsalted” hashed passwords had turned up on a Russian hacker website.

Apple, Facebook and Google are among other companies that also offer two-step authentication as an option for users.

I can’t help it. There’s just something about 3D printing that fascinates me. Maybe it’s because I watched all of DS9 with my husband, and during each shopping trip to the local Publix I wonder when you techies are going to invent a replicator. I’m still waiting because I am not a huge fan of cooking.

The point is that 3D printing is cool. Sure, there will soon be 3D pizza printing in outer space, and you’ve probably heard about the entire explosion around 3D printing of guns.

But, like any major technology both good and bad come from 3D printing. Nuclear technology is one example. We got the nuclear bomb and we also got nuclear medicine, credited with saving and improving millions of lives.

This is just as true with 3D printing, and a story on sister site CBSNews.com is a perfect case in point.

An Ohio baby was born with a condition called “tracheobronchomalacia,” a breathing condition that results in collapsed airways. Think of what happens with your garden hose when you squeeze it tight: no water comes out. Well, with the infant boy, Kaiba, his tracheal support cartilage simply wouldn’t stay open.

For months, the child survived with intubation, which is as unpleasant as it sounds, especially for a little baby. But then doctors at UMich were recruited to help. They’d been working on developing technology for generating flexible tubing that could be used in situations like that of little Kaiba’s. With an emergency exemption from the FDA (sometimes, the government can actually be helpful), the surgery went forward.

Two weeks after surgery he was breathing normally, without turning blue or needing emergency medical assistance. What’s particularly interesting about the University of Michigan technology is that it’s supposed to absorb into the body over years, once the child’s own cartilage builds up as he grows into adolescence.

It’s another win for medical technology, and another reason we can’t simply judge a technology as good or bad. Remember, it’s what you do with it.

Now, here’s a quick tip: breathing is good for you. Take a few deep breaths, hold them for a few seconds and let them out. You’ll feel better. Do it in honor of the UMich docs and little Kaiba.

LABOR’S embattled National Broadband Network is assessing whether its asbestos troubles could force more rollout delays as the Gillard government and Telstra go into damage control over the scare.

As the government, unions, NBN co and Telstra chiefs prepare for a crisis meeting in Canberra today, Workplace Relations Minister Bill Shorten declared he will push for the first national asbestos register for people exposed to the deadly material.

Telstra also moved to stem the fallout yesterday over claims its was lacklustre with safety, calling in auditing firm Price WaterhouseCoopers as independent advisers to help review the telco’s asbestos systems and processes.

The moves come after work was halted on the NBN rollout in Western Sydney last week following the discovery of asbestos in pits on the Penrith construction site overseen by a Telstra contractor.

While dust covered several homes during a subcontractor’s remediation work on old Telstra cable pits, there have also been claims of similar problems in Perth and Tasmania with contractors of NBN Co.

The problem has triggered fears of law suits and a blame game between the government, unions and Telstra amid claims the telco had taken short cuts in not preparing the pits properly for the NBN rollout.

The real take-away from Net Applications’ May 2013 release of NetMarketShare monthly operating system statistics is that, as PC sales continue to collapse, Microsoft’s Windows 8 could be a factor behind the plunge. 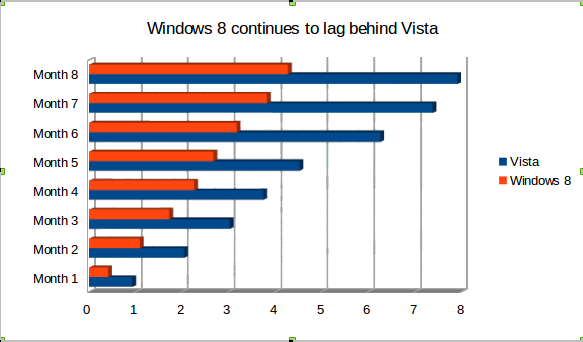 Windows 8 falls further behind Vista at similar points in their life-cycles. Numbers on the bottom reflect PC market share. (Data from NetMarketShare)