Why did HP get fined $3 million and are you safe?

One of the ways HP went wrong was telling retailers it was not liable for refunds or replacements unless the transaction received prior authorisation.

making it hard for consumers to obtain refund/replacement

In the event of a major failure of a product, the customer is entitled to return the goods for replacement or a refund, and HP only offered replacement after repeated repairs.

to the express warranty period, and for requiring consumers to pay for repairs outside that period. There was also a problem over the representation that products purchased online could only be returned to HP at the company’s discretion.

Australian Consumer Law provisions as – with some exceptions – goods or services costing up to $40,000 are deemed to be consumer transactions.

suppliers cannot limit, restrict or exclude consumer guarantees; avoid their obligations by getting the consumer to agree that the law of another country applies to the contract or to any dispute; or tell a consumer that they are required to pay for any rights equivalent to a consumer guarantee (eg, an extended warranty).

more information about this in this guide for businesses and legal practitioners.

The Australian Customs and Border Protection Service, mail carriers including Australia Post, and the Australian Communications and Media Authority (ACMA) have worked together on a campaign to restrict the importation of prohibited jammers into Australia

Nearly 100 items have been seized from international shipments since the start of the year. ACMA had previously singled out the devices as a priority area for compliance over 2012-13.

The operation, possession or supply of the illegal devices could result in jail time of up to two years, and penalties of up to $255,000 for companies.

Further, a five-year jail sentence and penalties of up to $850,000 could result if the device was found to have caused substantial interference to radiocommunications used by emergency services.

The technology has been granted an exemption to legislation for use in atrial in NSW prisons, specifically Lithgow jail.

The trial, to commence in July, forms part of an effort to clamp down on illegal mobile phone use in Australian prisons

The trial is expected to last 12 months.

Gnosis Superfund is a self-managed fund created by Daniel Brown, the founder of SharePoint consultancy Archon Gnosis. The consultancy’s sole employees are Daniel and his partner.

five servers mining the LiteCoin currency and his fund has around five percent of its portfolio in Litecoin, with the remaining 95 percent in traditional stock such as housing and cash.

Litecoin is the silver to Bitcoin’s gold – worth less and accepted by less physical businesses as a form of payment. A Bitcoin is currently worth around $72 while Litecoins are valued at approximately $2.40.

“Bitcoin is no more anonymous than physical cash and the ATO has experience in working with earlier forms of ­anonymous electronic money systems, and with physical cash, which are relevant for responding to new and emerging ­systems,” ATO senior assistant ­com­missioner for the cash economy Michael Hardy told The Australian ­Financial Review.

Microsoft says app bugs to be fixed within 180 days

Microsoft said that it will require developers to fix security vulnerabilities in their apps, and it will enable Microsoft to remove an app from sale if the developer does not provide an effective fix.

Microsoft also said that if an application is being exploited, it will work with a developer to have an update available as soon as possible, and it may remove the app from the store earlier if required.

Microsoft said that this is a new effort to help ensure users have confidence in the security of the software that is available in its online stores, including that developers will respond ‘appropriately’ when a vulnerability is discovered.

To date, no apps have come close to exceeding this deadline. However, Microsoft may make exceptions, such as when issues affect multiple developers or are architectural in nature, where such action is prohibited by law, or at Microsoft’s discretion.”

claimed the network’s 20MHz spectrum meant the company was able to offer among the fastest speeds available across mainland Australia.

Vodafone is currently the only carrier that has this spectrum band in all five major mainland state capital cities,” he said in a statement.

“We are now officially the third [mobile] ecosystem,” Tami Reller, Microsoft CFO and CMO of Windows, said in a keynote Monday at Microsoft’s Worldwide Partner Conference in Houston

For the three-month period from March to May, Android accounted for 52 percent of smartphone sales, compared to 41.9 percent for iOS and 4.6 percent for Windows Phone, according to market research firm Kantar Worldpanel ComTech.

Microsoft passed Blackberry for the No. 3 spot in global smartphone market shipments in the first quarter for the first time, by a margin of 3.2 percent to 2.9 percent

Apple and Amazon.com have ended their lawsuit over who has the right to use the “app store” name, clearing the way for both companies to use it.

“We no longer see a need to pursue our case,” Apple spokeswoman Kristin Huguet said. “With more than 900,000 apps and 50 billion downloads, customers know where they can purchase their favourite apps.”

Amazon countered that the term “app store” had become so generic that using it would not mislead customers.

It said in a court filing that even Apple Chief Executive Tim Cook had used the term generically, in discussing “the number of app stores out there,” while his predecessor Steve Jobs had talked about the “four app stores on Android.”

One in five Aussies ditch land-lines

Almost a fifth of the 2012 population, or just over 3.3 million people had replaced their fixed-line home phones with mobiles by the end of last year, according to Australian Communications and Media Authority

A Devon man claims to have set a new record by “riding” a jet engine-propelled shopping trolley at 44mph (70km/h) on a race track.

“This is a new record although it’s not official,” he said.

A team at North Carolina State University used an alloy of two metals – gallium and indium – that are liquid at room temperature but form a “skin” when exposed to air.

When printed, the shapes can be stretched without reverting to blobs.

The technology could be used for micro-circuits and wearable electronics.

“The metal forms a very thin layer of oxide and because of it, you can actually shape it into interesting shapes that would not be possible with normal liquids like water,” said the lead author, Michael Dickey.

He explained that the printer used a syringe to stack the droplets on top of one another.

The droplets retained their shape without merging into a single big droplet, which allowed the scientists to then shape the metal.

Designers in Hong Kong from the company Robugtix have built the Spiderbot, a remote control robotic spider.

It’s created using a 3D printer and has 26 motors hidden inside. The shoebox-sized robot is even covered in fake spider “skin” for added creep-factor.

Bad news if you want to buy one to scare your siblings with though: prices start at around £900!

The HTC One Finally Got Its Android 4.2.2 Upgrade

After promising for ages, then delaying it and killing it off on other phones like the One S, HTC’s finally come through with an Android 4.2.2 update for themuch-loved HTC One. What a cracking point update it is too, because HTC’s finally fixed one of the One’s biggest gripes.

The free update is available now OTA, although you might have to download a small bug fix first that actually allows you to, you know, update (I shan’t ask).

For those of you who haven’t seen it yet, here’s the pre-install changelog. 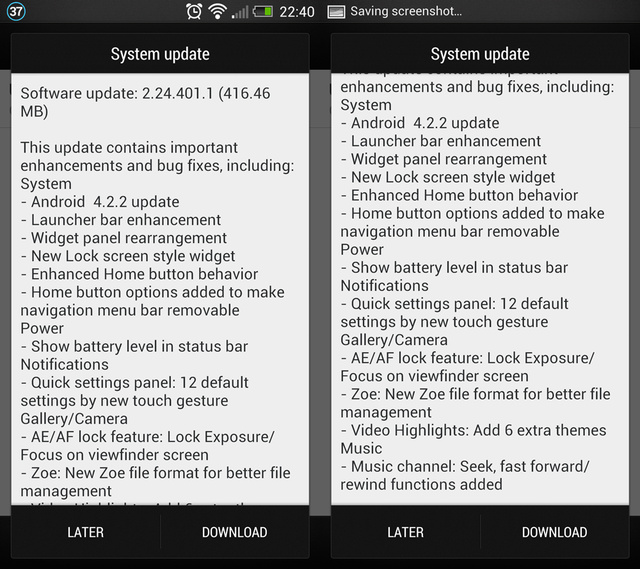 If you work for a company that depends on advertising revenue, you won’t hear people talk that often about using Adblock Plus, but it’s something that millions of consumers probably can’t imagine their Internet browsing without at this point. It manages to block out most ads on websites, providing a relatively clean experience that’s sometimes night and day from the standard web.

The thing is, some ads do get through, and Google at least appears to be paying to make that happen, according to a new report that’s prompting a lot of discussion on Hacker News. Adblock Plus has an “acceptable ads” filter that allows certain content by default, and the company makes no secret that it charges big companies for whitelisting services – it mentions it right in its FAQ.

Google provides search and advertising services, which together aim to organize and monetize the world’s information. In addition to its dominant search engine, it offers a plethora of online tools and platforms including: Gmail, Maps, YouTube, and Google+, the company’s extension into the social space. Most of its Web-based products are free, funded by Google’s highly integrated online advertising platforms AdWords and AdSense. Google promotes the idea that advertising should be highly targeted and relevant to users thus providing…

Troubled smartphone vendor HTC has released its latest unaudited quarterly results, and they’re not good – profits are down 83 per cent when compared with the same period last year.

The last two years haven’t been kind to HTC shareholders

In the second quarter of 2013, HTCreported profits of 1.25 billion New Taiwan dollars ($41.6 million), down from NT$7.40 billion the year before and well below analysts’ pessimistic expectations. Revenues fell 22 per cent to NT$70.7 billion ($2.33bn) and HTC’s shares fell on late trading after the figures were released.

In a contrite statement, HP, which has annual turnover of more than $120 billion, said: “We deeply regret that in the instances identified by the ACCC, HP fell short of our core commitment to high standards of service for Australian consumers who purchased our HP-branded desktop computers … laptops and printers and of our duties under Australian consumer laws.”