migration specialist 1E, which helped US carrier Verizon upgrade 80,000 machines to Windows 7 in four months, eventually hitting a pace of 30,000 per month.

“It took us a couple of months to get it all set up – but during that time, because of all [our] learnings, we were already migrating their machines,” said CEO Sumir Karayi. “We ramped up to this speed of about 30,000 a month and right at the end, they were doing even more than that.”

That was in 2012, but Karayi said 1E was still working on dozens of migrations ahead of the deadline, and had already upgraded “several million” PCs.

Microsoft has also said it will start notifying customers of the April deadline from 8 March via a pop-up, giving users a month to upgrade.

Apple hasn’t released a security update for the OS since September, suggesting the company may have finally ended support

Snow Leopard was missing from the latest round of OS X security updatesthis month, which included fixes for Mavericks as well as older versions Lion and Mountain Lion.

It was also left out of a December round of updates that only patched versions of Safari compatible with newer releases of OS X.

Snow Leopard was released more than four years ago and remains a popular OS with Mac users, installed on 19% of Macs

Mavericks is the most popular version of OS X, installed on 42% of Macs. It’s also the last version of OS X capable of running applications for PowerPC, the CPU Apple ditched for Intel in 2006.

Apple hasn’t made any comment and, unlike Microsoft, doesn’t issue guidance on when it might end support.

The Academy Award host broke Twitter with her Oscar-night group selfie using a mobile phone built by Samsung, a major sponsor of Hollywood’s big night. It generated a record 2.7 million retweets — a coup for her, the Oscars telecast and the Korean electronics maker.

But some sharp-eyed observers noticed something a bit different when viewing the talk-show host’s backstage tweets. Several of them, such as a photo of DeGeneres with actor Channing Tatum, were sent not from a Samsung Galaxy handset but a rival iPhone.

The source of the photos and tweets can’t be seen on DeGeneres’ Twitter page, but is visible when they’re viewed on another platform such as TweetDeck

Delhi officers could not operate a portal holding more than 600 complaints – a lapse that has gone undetected since 2006. The complaints came from India’s anti-corruption agency, called the Central Vigilance Commission (CVC).

two senior police officers have now been trained in the system, and can access the 667 cases that have piled up since the portal launched. One officer the  oversight was “a technical problem”, and complaints are now being addressed.

The CVC collates complaints against government officials and directs law enforcement to investigate them. The commission received 36,000 complaints in 2013,

Despite the confusion, police in Delhi “remain committed to public grievances”, a senior officer told the Indian Express

Research by security company Blue Coat suggests web adverts have overtaken pornography as the most common way for users to encounter a malware threat.

On one in five occasions when a mobile user comes into contact with malware, it is via an online advert.

Cisco’s 2014 Annual Security Report noted that although mobile malware was “not a significant percentage” of web malware encounters “it is still worth noting because mobile malware is clearly an emerging area of exploration for malware developers”.

It also found that when mobile malware is intended to compromise a device, it is nearly always targeted at Android devices.

But when mobile malware is not specifically designed to target certain types of devices, then 70% of the attacks were experienced by Android devices and 14% by Apple iPhone users.

Blue Coat recommended that mobile users considered blocking web ads on their devices to prevent them becoming victims of a malware attack.

Ad-blocking apps exist for both Android and Apple devices and browser settings can be adjusted to prevent ad pop-ups.

An app that allows people to charge members of the public to use their private toilet is being tested at the New Orleans Mardi Gras.

AirPnP – inspired by AirBnB, a service for renting out your property to travellers – said it offered a “legal alternative” to urinating in public.

Willing “entrepeeneurs” can charge a price to use their toilet, and must add details such as cleanliness and toilet paper thickness.

Users can rate their “pee experience”.

Almost 2,000 people have signed up to use the app. At the time of writing, about 20 toilets had been added. All are in New Orleans, except one posted in Budapest, Hungary.

“Clean bathroom in our uptown home,” reads one.

“Toilet paper and hand soap provided, of course. Large mirror for checking yourself out.”

Telstra is set to launch a real-time view of customer billing and payments, as well as a new digital service for customers to track the schedule of a Telstra technician assigned to work at their premises.

When a Telstra customer logs on to their customer portal today, they usually see a summary of usage data that is delayed by 24 hours,

The telco will also attempt to stop customers having to be home for large periods of time while waiting for a technician to arrive, by introducing real-time tracking.

The telco is expected to use geolocation technologies to more efficiently allocate jobs and keep customers abreast on when a booked technician is likely to arrive. 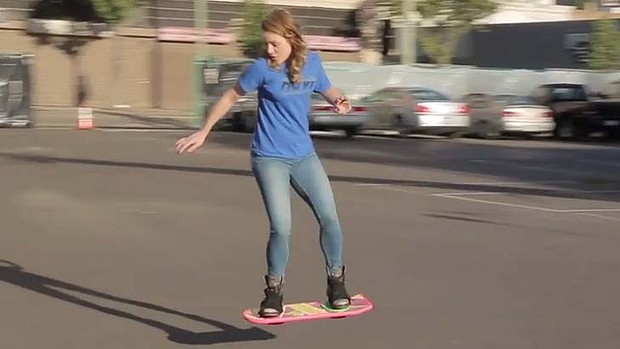 It was a new piece of “hoverboard technology” headed by scientists at a supposed start-up company called HUVr that seemingly everyone wanted to believe was real.

The “launch” video for a flying skateboard posted on Wednesday and watched by close to 6 million people led many to believe a Back to the Future II hoverboard had finally become a reality.

Promising “the following demonstrations are completely real” and featuring celebrity endorsements from the likes of musician Moby, actress Agnes Bruckner, pro skater Tony Hawk and Back To The Future actor Christopher Lloyd, the video had some people knowledgeable in physics wanting to throw their science out the window in the hope it was all true. It even used MIT’s name to give credibility to the technology.

As it turned out, comedy site Funny or Die, headed by actor Will Ferrell and Adam McKay’s production company Gary Sanchez Productions, made fools of everyone. The video, produced using suspension cables to make the board “hover”, was a stunt.

On Thursday, Funny or Die issued an apology video featuring actor Lloyd. Lloyd said he was “tricked”, “hoodwinked” and “scammed”.

“You may be saying, ‘Chris, what do you mean you were tricked? You were there, surely you saw the wires and cranes and effects people?'” he said.

Tony Hawk told his Twitter followers on Thursday the video was a fake and apologised. 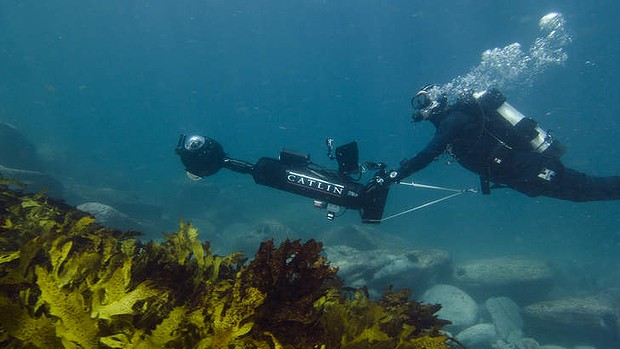 Divers propelled by underwater scooters have begun filming test footage from the bottom of Sydney Harbour and beyond into the deep waters off Bondi and Manly beaches for an eventual audience of at least one billion people.

Sea horses, kelp forests, the odd bathtub but no concrete boots to date have been captured for an eventual unveiling on Google Maps.

Professor Emma Johnston, from the Sydney Institute of Marine Science, said the underwater survey would provide a scientific baseline to monitor change across the harbour. It also will highlight hotspots for debris and other forms of pollution to galvanise government and public action.

“I think people will be surprised by the beauty and diversity of the harbour,” said Professor Johnston about the joint project with Google Maps and the Catlin Seaview Survey.

“We tend to think of the harbour as a monolithic and flat surface, but people will be blown away by what is happening underneath; the amazing kelp forests, underwater gardens of sea tulips and sponges and fish that they have never seen. The diversity of sea life is greater than any harbour in the world.

The project’s launch comes as Google began using its all-seeing backpack contraption called “Trekker” in Sydney last month, which it plans to use to collect imagery of places only accessible by foot to incorporate into Street View.

It also comes as Sydney man Matt McClelland, 40, revealed how he was documenting bushwalks and bushfires with his own 360-degree camera rig called Emu View. 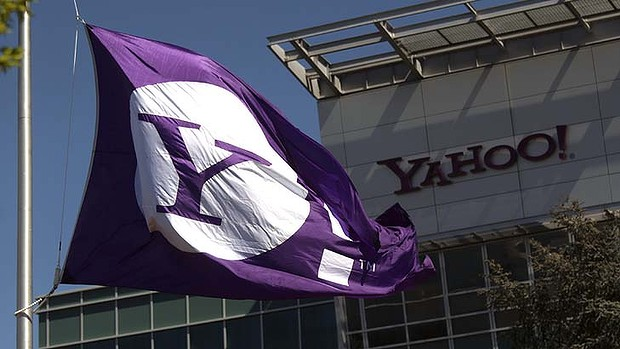 The shift began with the Yahoo Sports Tourney Pick’Em arena and will gradually expand to all of the company’s online services and products, including photo-sharing website Flickr.

“We are moving towards requiring all users to access our service with a Yahoo username over time,” the faded internet search star said.

Yahoo portrayed the move as enabling the California-based firm to provide more personalised services and content to visitors, but it was also seen as part of a strategy to better target money-making ads.

Yahoo is bucking a trend of websites accepting Facebook or Google usernames and passwords to allow single online identities that follow people around the internet. 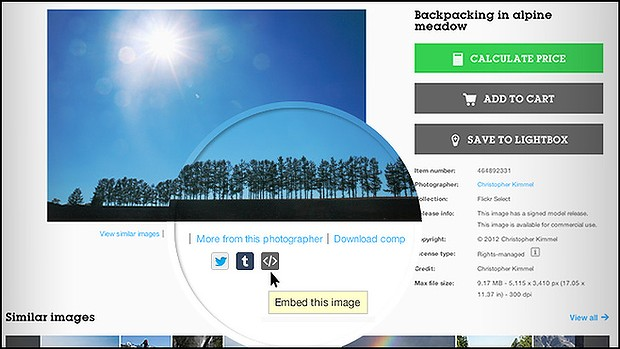 Getty Images will give more than 40 million of its stock photos away for free as it seeks to address online photo piracy.

The stock photo agency introduced a new “embed” function on Thursday that will enable its images to be published on websites, blogs and social media free of charge, provided the images are not used to directly promote a product, service or business.

The move is a bid to address the largely unchecked illegal use of Getty’s vast trove of images, said Craig Peters, the company’s head of product and content development.

“Millions and millions of people are using this content without licence – they’re right-clicking and stealing it,” he said.

Photographers are going uncredited and users unwittingly placing themselves at risk of prosecution.

The new feature will include photographer attribution and when clicked will link back to Getty’s website, where the image can be licensed for commercial use.

In future, Getty may look to further monetise the tool by incorporating advertising in the same vein as YouTube videos, Peters added.

1 in 10 Americans thinks HTML is an STD, study finds 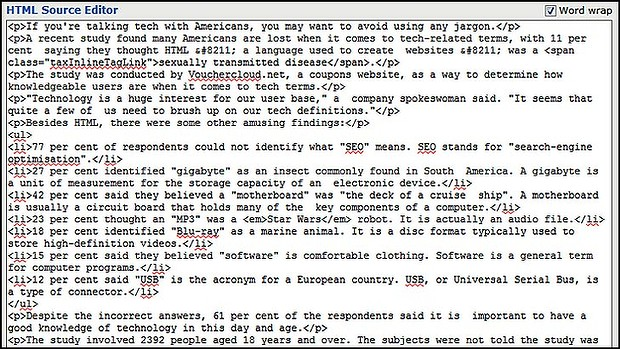 A recent study found many Americans are lost when it comes to tech-related terms, with 11 per cent saying they thought HTML – a language used to create websites – was a sexually transmitted disease.

The study was conducted by Vouchercloud.net, a coupons website, as a way to determine how knowledgeable users are when it comes to tech terms.

“Technology is a huge interest for our user base,” a company spokeswoman said. “It seems that quite a few of us need to brush up on our tech definitions.”

Besides HTML, there were some other amusing findings:

Despite the incorrect answers, 61 per cent of the respondents said it is important to have a good knowledge of technology in this day and age.