Australia’s answer to Facebook
Spring.me is to floats on the Australian Securities Exchange, the final stage in the company’s capital raising campaign.
Aimed at helping “online-all-the-time” Gen Ys make friends, Spring.me’s social network of websites and apps for making connections through questions and answers has attracted more than 5 million regular visitors since its launch in September 2013.
“As you go through life, you generally only become friends with around 1 per cent of the people you meet,” says Mr Klinger. “We wanted to use technology to help find the 1 per cent and remove the friction to help you meet them.”
Spring.me features include group questions, where a member can ask up to 10 people online a question and get feedback from strangers, and multiple content feeds including questions, answers, photos, opinion polls and people online now.
Aust Post sets up warehouse in US
https://shopmate.auspost.com.au/
The postal service has set up a warehouse in Oregon to give Australian consumers a US address.
Using Australia Post’s ShopMate service, launched last week, subscribers can have their parcels sent to their “US address” before they’re forwarded to their Australian address.
Parcel Post general manager Kelly Heintz says the service will cut the annoying price difference suffered by Australian consumers.
ShopMate isn’t the first service of its kind in Australia, but it’s the first that won’t rely on more costly international couriers.
Australia Post charges a base rate of $24.95 a parcel, with a weight rate of $5.95 per 500 grams. 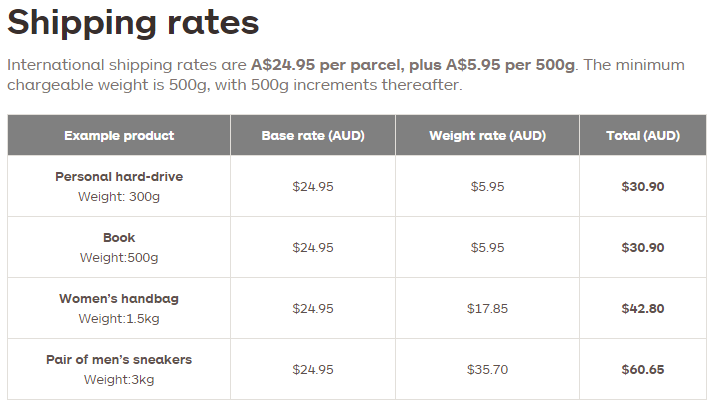 New malware targets Apple devices
APPLE mobile devices may have been infected with malicious software that can install third-party applications without the device being jailbroken, a US security firm claims.
Palo Alto Networks claimed the malware can collect information from iOS devices like contacts and iMessages.
The malware, known as WireLurker, is able to attack iOS devices such as the iPhone and iPad through OS X using a USB connection, Palo Alto Networks said.
No comment from apple as yet
Tech firms get new tax breaks in Ireland
Tucked into legislation to eliminate a much criticised tax structure known as the “Double Irish” is a separate provision that would allow companies to pay no corporate tax on profits earned from patents, licenses and other intellectual property
The legislation, which would expand a current tax break that allows companies to shield 80 per cent of that income, also proposes to add customer lists to the types of intellectual property that can be covered.
The expanded tax provision proposed in the Irish budget would give companies an incentive to make Ireland the home for their intellectual property — some of it now tied up in Double Irish structures — as well as give them a simpler means to shield some of the same income from taxes.
“Rather than reducing tax deductibles, they have been increased in this budget,” Jim Stewart, associate professor of finance at Trinity College Dublin, said Tuesday. Lawmakers in Ireland are debating the proposals this week.
Apple eyes bond offer to raise even more cash, report says
Apple is considering selling bonds on the open market to raise cash, a new report claims.
The iPhone maker is working with two investment banks — Deutsche Bank and Goldman Sachs — to announce a new bond sale in Europe, the Wall Street Journal is reporting,
Companies often offer bonds to raise some quick cash from investors at a specified interest rate. Because Apple is viewed as a solid company and its bond rating is high, the company has offered slim three-year yields on the cash it raises. In April, in fact, Apple’s bond sale delivered only 1 percent in yield for a three-year bond.
Exactly what Apple, a company that has a vast cash hoard and that continues to pull in billions each quarter, would want to do with the cash is unknown at this point. In some cases, companies that perform well offer bonds to raise debt, cut into their taxable income, and return the cash to shareholders without over-leveraging their cash.
Taylor Swift pulls music from Spotify, to celebrate birthday in Australia
Pop artist of the moment Taylor Swift, who has just announced an Australian tour next year, has abruptly removed her entire music catalogue from online streaming services without explanation.
In a blog post message, Spotify begged Swift to reconsider the decision.
“We love Taylor Swift, and our more than 40 million users love her even more – nearly 16 million of them have played her songs in the past 30 days, and she’s on over 19 million playlists.
Music by AC/DC, The Beatles and Garth Brooks (who uses his own service GhostTunes) is not on Spotify. Bob Seger has only one song and The Black Keys’ last two albums are not on the service.
Specs leak of Apple’s alleged Surface killer
Technical drawings and specs of the 12.2in iPad Pro tablet have allegedly leaked online.
Japanese website Macotakara, which claims to have received the information from a “reliable source”, said the tablet will be a direct rival to the Microsoft Surface Pro 3 and has many of the same specs.
Macotakara’s source said the iPad Pro will feature a 12.2in LCD screen, which is slightly bigger than the Surface Pro 3’s. The width and height will also allegedly be similar to the Surface Pro 3.
The iPad Pro will also feature iSight, a Lightning connector and Touch ID, the website said. It will be between the iPhone 6 and iPhone 6 Plus in terms of thickness, and definitely thicker than the iPad Air.
“[The] product design concept seems to be based on [the] iPad Air 2, [a] pair of speakers and microphones will be added on [the] top-side not only bottom’s pair. [The] iPad Pro might be capable [of] supporting stereo audio,” Macotakara added.
2015?
Original Apple to go under the hammer
The only surviving Apple-1 documented as being sold by Steve Jobs will go under the hammer at Christie’s in December when it is anticipated to fetch up to $600,000 (A$ 690,000).
The so-called Ricketts Apple-1 Personal Computer, named after its original owner Charles Ricketts and being sold on December 11, is documented as having been sold directly by 21 year old Jobs, to an individual from the Jobs’ Los Altos, California family home garage for $600.
An Apple-1 expert serviced and started the computer, running the standard original software program, Microsoft BASIC, and an original Apple-1 Star Trek game to test it out, Christie’s said.
Telstra to pay $18k to judge following privacy breach
The judge contacted Telstra in April 2013 to have a phone line for an alarm system connected at his home because of security concerns.
When the judge contacted Telstra through its instant messaging facility to arrange the connection of the phone line, he told the Telstra representative that the sole purpose of the phone line was for the alarm system.
However, Telstra published the complainant’s name, address and the number of the phone line in both the White Pages online and hard copy directory through its subsidiary Sensis.
Pilgrim found that Telstra breached National Privacy Principle (NPP) 1.3 and NPP 2.1 of the Privacy Act because it did not tell the judge that it would publish his personal information in the White Pages.
NPP 1.3 states that organisations cannot collect personal information unless it is necessary for one or more of its functions or activities.
NPP 2.1 states that personal information can not be disclosed other than for a permitted purpose.
Pilgrim also found that the privacy breach has had serious consequences for the judge including fears for his physical safety.