It’s not often you’ll see Kogan, champion of online retail, rallying behind the cause of bricks and mortar. No, the company isn’t opening a physical store, but it did announce today a new “Bricks and Mortar” bundle. As chief executive officer Ruslan Kogan explained: “People have been asking me for years if Kogan.com will become a bricks and mortar retailer. I knew that Aussies love getting the best prices on the latest products like LED TVs and iPhones, but I had no idea so many people were after building supplies.”

It’s hard to believe, but iTnews has unearthed one of the oddest pieces of tech memorabilia we’ve heard about in a long while. It’s a napkin featuring what iTnews claims to be a sketch of an early design of the NBN. Our colleagues report that the item was up for sale on eBay this morning for $5,000.

The pilot of former Prime Minister Kevin Rudd’s ministerial jet has confirmed the existence of a long-rumoured napkin used to sketch out the first iteration of the national broadband network, today listing the used serviette for sale.

a new listing on global ecommerce site eBay – made without fanfare – reveals for the first time that the rumours were, in fact, true.

iTnews can confirm the legitimacy of the napkin, which has been kept for six years by a former pilot for Rudd’s ministerial jet.

The pilot has requested to remain anonymous for privacy reasons. 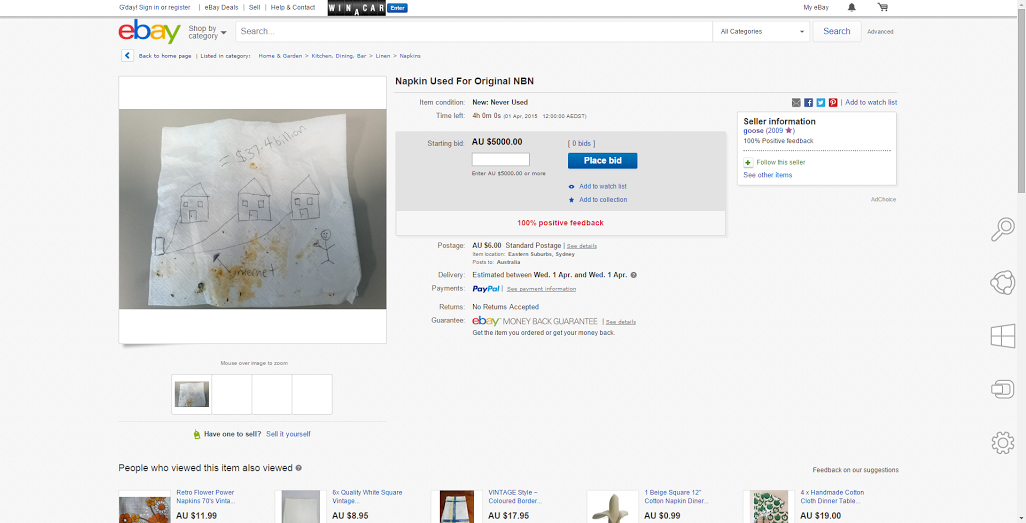 We’ve already seen curved phones, so we suppose it’s not too much of a stretch to imagine a phone so sharp it can be used to chop food. Samsung’s Galaxy Blade Edge is supposedly designed for just that, with a “diamond edge blade” for superior cutting.

Microsoft used the background image for its main Bing search page to tout its April Fools joke in which it claimed the search system could read palms and minds to ensure people got the results they really wanted.

Anyone could try thought-powered search by putting their right hand on a screen where the Bing homepage indicated. 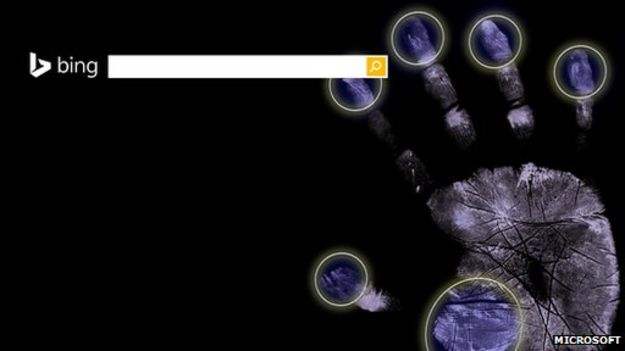 HTC joined in with fake product pages for the Re-Sok – the “world’s first truly smart sock”. The technology-enhanced footwear is engineered with GPS so pairs of socks can easily find each other and have an automatic hole warning system to alert owners when their intelligent footwear is running thin.

New York-based footwear maker Miz Mooz joined in and produced a pair of shoes that have smartphone docking ports in each toe so each one can be used to take selfies.

iiNet has blamed Australia’s biggest telecommunications company, Telstra, for the slower internet connection speeds that have hit some of its customers since the arrival of Netflix.

a Telstra spokesman said a mass service disruption (MSD) was not the source of iiNet’s complaints.

“A ‘mass service disruption’ refers to a fault on the copper line, not the kind of congestion on a network that it is being reported iiNet is experiencing,” the spokesman said.

“We can’t comment on the performance of the iiNet network. iiNet is responsible for the end-to-end management of their network and iiNet customers need to contact them if they are experiencing problems.”

The spokesman defended the company’s copper network, saying it could service the hundreds of thousands of Australians who have subscribed to video streaming services, such as Netflix, Presto and Stan this year.

Foxtel, which is half-owned by Telstra, launched a streaming joint venture – Presto Entertainment – with Seven West Media in January. The telecommunications company has an unmetering deal with Presto.

Stan, which also launched in January, has more than 100,000 customers and is streaming more than 1 million hours of content a month.

Existing Office 365 customers with services hosted in its Asia Pacific region in Singapore will be automatically moved to Australia unless they opt-out. Customers will be given six weeks advance notice of their move date, which will occur out of business hours.

What free Office on Windows mobiles tells us

Microsoft has announced it will be releasing Office for free on Windows mobile devices.

Continuing Microsoft’s distinction between mobile and desktop ocurring at 10.1in in screen size, it’s decided that Office for Windows 10 devices also needs two different approaches. The decision has come about due to its research discovering that most people using 10.1in or smaller devices are using them on the go, as a compliment to a dedicated laptop or desktop PC.

Microsoft has also opened up Office 2016 Preview for IT professionals, and released a free preview build of Office 2016 for Mac too.

Australians pulled down 1.1 million terabytes, or just over an exabyte, of data through fixed and wireless internet connections last year, the latest set of official statistics show.

This represents a total increase of 15 percent over 2014, according to figures published by the Australian Bureau of Statistics

Smartphones are increasingly being used for internet data connections, the ABS stats show. While the number of mobile handset subscribers rose only slightly by 2 percent to 21 million, data usage jumped by 91 percent, to over 52,745TB from 27,627TB.

Access speeds are creeping up in Australia with more subscribers – 2.3 million compared to just under 2.1 million the year before – having connections of 24 megabits per second or greater.

However, most broadband connections (6.7 million) provide download speeds in the 8 to 24Mbps range – just under 3.5 million only get 256Kbps to 8Mbps.

ABS defines broadband as 256Kbps. Its survey did not capture upload speeds

In total, Australia had 12.7 million internet subscribers last year, up from 12.4 million the year before. 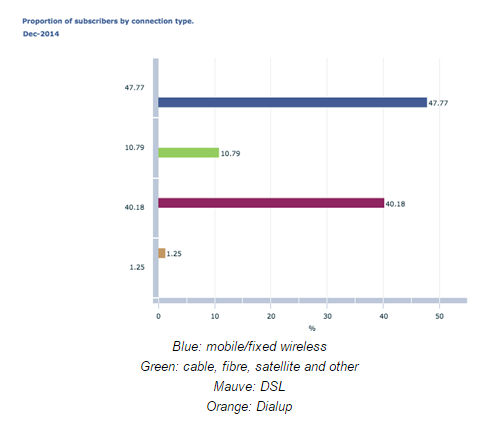 NBN Co did not detail the type of access technology the new premises would receive. It said the type of technology deployed would be confirmed once the construction planning stage was finalised.

It did, however, confirm that the current rollout schedule did not include hybrid-fibre coaxial or the long-term satellite.

Around 158,000 extra homes and businesses across 40 regions in NSW are expected to see NBN work start on their premise by next September. 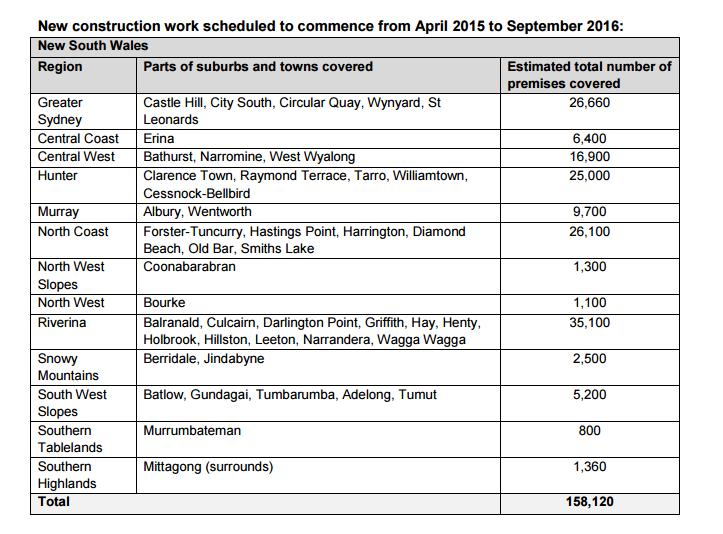 Some of the biggest names in entertainment have re-launched the music subscription service Tidal, which they are billing as the first artist-owned platform for music and video.

At an event in New York on Monday, Madonna, Beyonce, Kanye West, and 13 other performers announced they had become co-owners of Tidal.

As well as a standard subscription for $9.99 a month, Tidal offers a “high fidelity” option for $19.99, which claims to deliver better sound quality.

Their mission, she said, goes beyond commerce and technology.

“Our intent is to preserve music’s importance in our lives,” she said.

Notably, the majority of the company will be owned by artists, a symbolic move in a business where musicians often have little control over how their work is distributed and consumed.

Jay Z’s strategy will include encouraging artists to lobby their labels to give Tidal new music a week in advance of other services, giving it a short window of exclusivity. 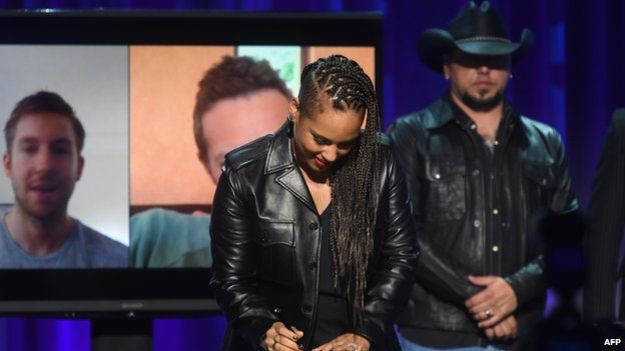 Though the Retina MacBook isn’t officially launching until April 10, anearly 64-bit Geekbench benchmark of the entry-level machine was spotted this afternoon, giving us our first glimpse at how the new ultra thin MacBook measures up to existing products in Apple’s notebook line.

The 1.1GHz entry-level Retina MacBook with an Intel Core M-5Y31 processor was benchmarked twice, giving two single-core scores of 1924 and 2044, and multi-core scores of 4038 and 4475. Comparatively, the 2015 entry-level MacBook Air with a 1.6GHz Intel Core i5 processor hasseen scores in the neighborhood of 2881 (single-core) and 5757 (multi-core), so it’s a good bit faster than the new MacBook.

Performance wise, the Retina MacBook CPU seemsto be par with the higher-end 2011 MacBook Air with a 1.8GHz Core i7 processor, but graphics performance on the new MacBook, which Geekbench does not measure, should be far superior to the 2011 machine. Taking into account the Intel HD 5300 graphics and an improved SSD, the Retina MacBook will outperform the aforementioned 2011 MacBook Air even though the CPU speeds are similar.

Apple offers two additional processor upgrade options for the Retina MacBook, at 1.2GHz in the higher-end machine and at 1.3GHz as an optional build-to-order upgrade, both of which will see somewhat better performance results than the entry-level 1.1GHz processor.

Update 8:34 PM: The original Geekbench results have been deleted, but aGoogle cache is available.

For its upcoming streaming TV service, Apple is asking its content partners to take on the job of streaming television shows and movies to its customers, reportsRe/code. Rather than hosting streaming content itself, Apple is requesting that its partners build out the necessary infrastructure and take on the related costs.

Apple is asking TV networks to handle the responsibility and cost of the streaming infrastructure associated with its Web video service, industry executives say. That issue is one of many unresolved questions about the proposed service, which Apple would like to launch next fall but can’t until it lines up programming deals.

Negotiations for the streaming service are reportedly being conducted by iTunes chief Eddy Cue, who has told networks and potential partners that Apple wants to concentrate on software and hardware, areas where it excels, while leaving infrastructure concerns in the hands of people who are better suited to handle it. 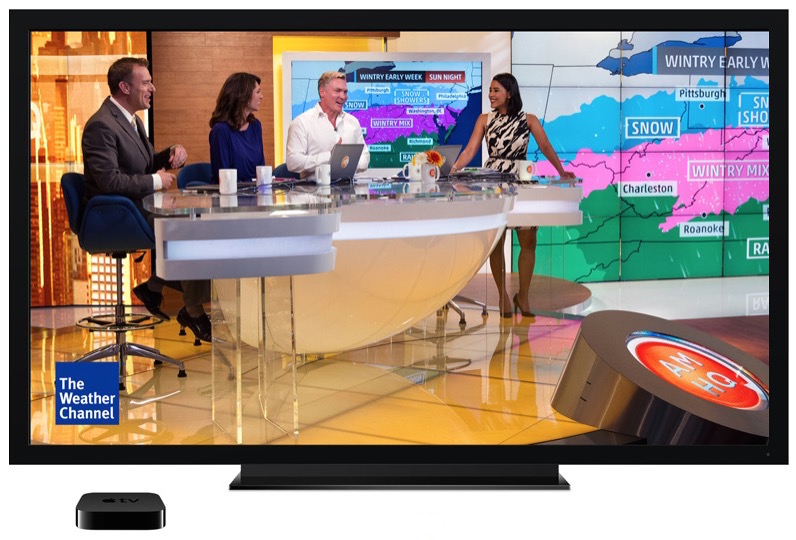 According to Re/code, the request isn’t unusual because content that users stream from existing Apple TV channels and iOS apps is handled by the networks that provide the content, through partnerships with content delivery networks like EdgeCast. Though streaming services aren’t overly expensive, at approximately 5 cents per hour per stream, the idea of dealing with the demand of an Apple television service available to millions has “given executives pause.”

In addition to leaving infrastructure concerns to those with more experience, a source that spoke to Re/code believes that it’s also possible Apple is hoping that if programmers provide the streams, Internet providers like Comcast and Verizon will be less likely to “penalize Apple’s service.”

Apple is rumored to be working with several partners on its upcoming streaming service, including CBS, ABC, Fox, Discovery, Disney, and Viacom. It may include around 25 channels, and pricing is said to be in the range of $30 to $40. The streaming service may make its debut in June at the 2015 Worldwide Developers Conference ahead of a fall launch.

Microsoft on Tuesdayannounced the Surface 3 tablet with Windows 8.1, available in May for a starting price of $499. The latest iPad competitor is designed to be a complete laptop replacement, running full Windows, including desktop applications, and delivering all-day battery life. Surface 3 also includes a quad-core 1.6GHz Intel Atom processor, a significant shift from ARM processors used in previous models.

Surface 3 comes with 64GB storage and 2GB of RAM for $499, while a 128GB option with 4GB of RAM costs $599. Both Wi-Fi only and 4G LTE models are available. The tablet also features a 10.8″ Full HD display at 1,920×1,280 pixels resolution, full-size USB 3.0 port, Mini DisplayPort, microSD card reader, headphone jack, cover port, micro USB charging port, Bluetooth 4.0 and three-position kickstand. The tablet will receive a free upgrade to Windows 10 when available and includes a one-year Office 365 subscription.

The base model Surface 3 in 64GB and 128GB options is available for pre-order now throughMicrosoft’s website for delivery starting the first week of May, while the 4G LTE models are listed as shipping by June 26th. The tablet includes a 1-year limited hardware warranty. Type Covers are a $130 add-on, and Surface pens are available in blue, red, black, and original silver.

Microsoft’s new Surface 3 joins the existingSurface Pro 3, starting at $799. The professional tablet rivals the MacBook Air with a 12″ Full HD display at 2,160×1,440 pixels resolution, Intel Core i3, i5 or i7 processor, up to 9 hours of web browsing, full-size USB 3.0 port, Mini DisplayPort, microSD card reader, two 5-megapixel HD cameras on the front and back, Microsoft Office, Adobe Photoshop and more.