New Zealand ISP allows its customers to subscribe to the U.S. version of Netflix

Slingshot, a local internet provider in New Zealand, wants to give its subscribers a little extra perk: The ISP just added a new “global mode” to its internet plans that allows its customers to access video services like Netflix or Hulu without getting in trouble for coming from the wrong country (hat tip to Broadband Reports).

Slingshot’s global mode is essentially a VPN, meaning that it reroutes any traffic through servers situated in other countries. Slingshot subscribers using global mode may look like they’re located in New York as opposed to Auckland.

Anyone using this type of VPN likely violates the terms of of service of a streaming site, which is why Slingshot coyly suggests that the service is just for customers who happen to house international visitors:

“We don’t want your guests being treated like second-class citizens just because they are staying in New Zealand. Instead, we want them to have the same rich online experiences as they do in their own country. Global Mode lets them access their favourite international sites and services from your home broadband connection.”

Once mainstream support ends, Windows 7 will enter “extended” support, which usually lasts for five years. During this period, customers will still get free security updates for Windows 7, but they’ll have to pay for bug fixes and for phone and online support.

Microsoft will still provide free security updates for Windows 7 until 14 January, 2020, which is when extended support is slated to expire

Meanwhile, the next big looming support deadline for small-business customers is 14 July, 2015, when Microsoft will cease all security updates for Windows Server 2003.

The device, developed by MicroCHIPS – an offshoot of MIT – is implanted under a woman’s skin, delivering a small dose of levonorgestrel hormone into the body.

While contraceptive implants have been around for some time, the new chip differs in two important ways.

First, it’s longer lasting. Current hormone implants have to be changed every three to four years, whereas MicroCHIPS’ implant can remain in place for 16 years.

Second, when a woman wants to get pregnant, the device can be turned off via remote control, and turned back on again when she wishes to start using contraception again.

While the device is only in the early stages of development, it is hoped it could be on sale as early at 2018.

Alongside the 90-degree corners and giant size – at 3.18in wide, it is bigger than the Samsung Galaxy Note 3 – it has a physical Qwerty keyboard.

Beyond these physical features, little else is known about the device. It will be officially launched in September this year, before going on sale in 2015.

Samsung has announced it will scrap plasma TVs

It said falling demand meant it would instead focus on producing curved and ultra-high-definition (UHD) TVs.

But they tend to use more electricity and are considerably bulkier than the now more popular liquid-crystal display (LCD) and light-emitting diode (LED) TVs.

Payments gateway Braintree is making its first significant product announcement since itsacquisition by PayPal last year, with the launch of a jointly developed Braintree SDK (software development kit) for developers. The new toolset is being called the “Braintree v.zero SDK” to indicate how it’s been rebuilt from the ground up, and is said to be easier and quicker to integrate within web, mobile web and native mobile applications.

Braintree previously offered SDKs for developers looking to accept payments within their applications, and this is meant to replace those earlier versions as the new Braintree experience.

While the standout feature, of course, is the inclusion of PayPal as a payment method, the new SDK has actually been built in such a way that turning on or off PayPal, as well as any future payment methods Braintree chooses to integrate, will be as simple as flipping a switch. 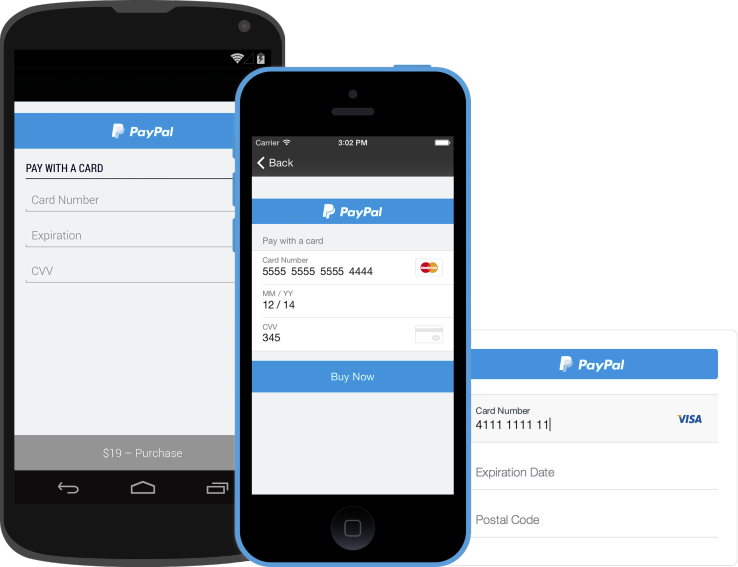 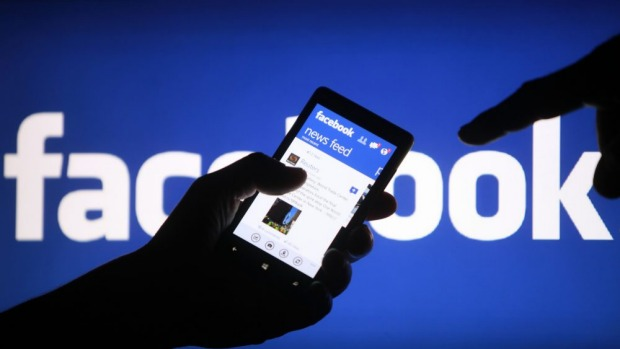 Posting to Facebook at 3am is rarely well-considered or necessary. But what if there was a sober voice of reason tapping you on the shoulder and urging you to reconsider?

That is the thinking behind a new technology some Sydney schools hope will forestall students making poor choices on social media, while protecting others from bullies.

Here is how it works: A student publishes something rude or insulting on Facebook, Twitter or Instagram. It contains a blacklisted word or phrase, or it is posted at a time of day – 1am to 5am, for example – deemed risky. The post is then stalled while the student is sent a prompt, alerting them to its offensive nature and urging them to reconsider.

At this point, the student can delete the post, modify it or ignore the warning completely and proceed as intended.

The designers are also working on an image function. Skin-coloured pixels, for example, could indicate nudity. Or the shapes of guns and other weapons could be identified.

”In terms of brain development, teenagers literally don’t have a filter until their late teens, so this really is like an electronic filter,” 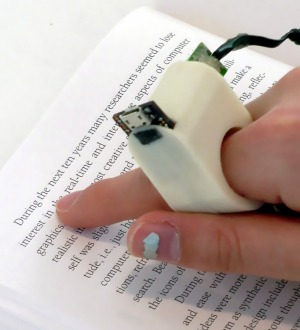 Scientists at the Massachusetts Institute of Technology are developing an audio reading device to be worn on the index finger of people whose vision is impaired, giving them affordable and immediate access to printed words.

The so-called FingerReader, a prototype produced by a 3-D printer, fits like a ring on the user’s finger, equipped with a small camera that scans text. A synthesised voice reads words aloud, quickly translating books, restaurant menus and other needed materials for daily living, especially away from home or office.

Reading is as easy as pointing the finger at text. Special software tracks the finger movement, identifies words and processes the information. The device has vibration motors that alert readers when they stray from the script, said Roy Shilkrot, who is developing the device at the MIT Media Lab.

The FingerReader can read papers, books, magazines, newspapers, computer screens and other devices, but it has problems with text on a touch screen, said Shilkrot.

That’s because touching the screen with the tip of the finger would move text around, producing unintended results. Disabling the touch-screen function eliminates the problem, he said.

Berrier said affordable pricing could make the FingerReader a key tool to help people with vision impairment integrate into the modern information economy. 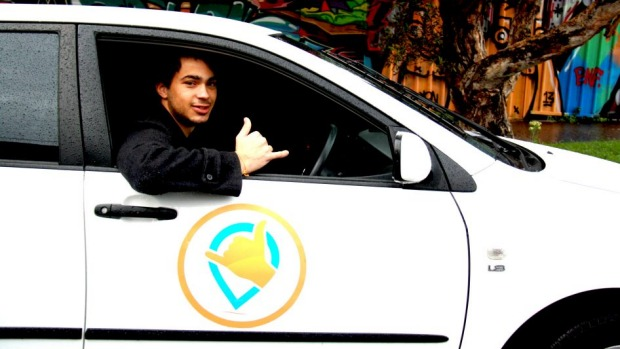 How does “free” transportation in a stranger’s car sound? That’s what a new ride-sharing app called RideSufing is offering as it publicly launches in Sydney to compete with Google-backed Uber.

“Rides are free and are without expectation for reward,” its website says. “If you prefer, you may give [a] donation. We compute an appropriate suggested donation based on time and distance.”

Offering a donation mechanism rather than asking passengers to pay a fee at the end of each trip appears designed to skirt around state laws which might prevent the app from existing.

When Uber launched UberX – which offers a similar ride-sharing service – the NSW government’s Roads and Maritime Service said that if payment was accepted, drivers and cars needed to be appropriately accredited and authorised by RMS. They were not.

RMS has said, however, that the laws did “not apply to, for example, a group of friends sharing expenses or a car pooling arrangement between colleagues sharing a ride to the office”.

This is where RideSurfing comes in, and where its founders claim that its passengers are part of a community. As one driver recently told this writer when testing the service, “we’re your friend”.

“It’s because we are a donation-based community that we are within the boundaries of the law,” Manutea Dupont, the 33-year-old co-founder of RideSurfing, claimed in an interview. 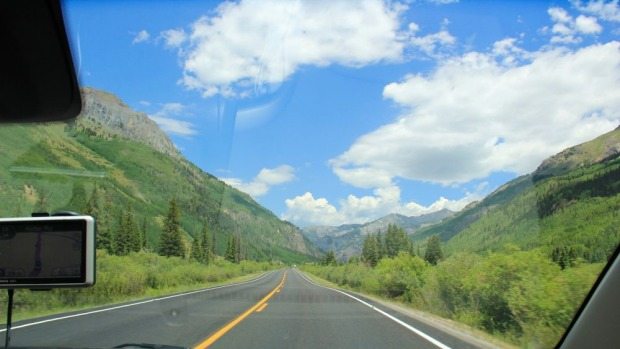 Researchers in Barcelona are changing the way we think about GPS.

For the past two decades, GPS users have been moving from A to B via the most direct way possible.

Now, Daniele Quercia, a researcher at Yahoo Labs, has engineered a piece of technology to direct users via the most “beautiful” way.

“The goal of this work is to automatically suggest routes that are not only short but also emotionally pleasant,” the Yahoo team said in its research findings.

While motorists may still be more interested in the fastest route, the technology could have significant implications for pedestrians, particularly tourists.

Quercia and her team have worked out an algorithm to measure the beauty of specific locations.

“Compared to the shortest routes, the recommended ones add just a few extra walking minutes and are indeed perceived to be more beautiful, quiet, and happier,” the researchers found.

The user is faced with 10 sets of photos and asked to choose the most beautiful of the two.

The results are then crowdsourced, in an attempt to eliminate some subjectivity.

The recommended scenic route comprises the 10 most “beautiful” photos along the path from A to B.

At the heart of the idea is that a user can enter a start and final location and the algorithm will be able to map the most beautiful route between the two.